Hamilton Township, Monroe County – Sparkling wine bottles popped and rainbow confetti rained on Randy and Linda Rice as they opened the doors to their new winery. The moment was a dream more than a decade in the making. 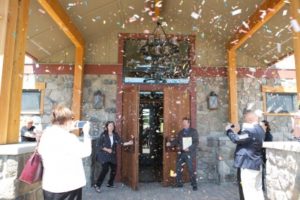 The couple first fell in love with wine during a trip to the Finger Lakes region of New York in 2003. The trip inspired them to try growing grapes and making wine. They started with just a few vines on a fence in front of their home. Later, they transformed their wooded hillside backyard into a small vineyard. “It was quite a challenge to remove all of the trees on our own. You had to be like a mountain goat to work the property, but it was so worth it,” said Linda.

Though the work was difficult, the couple loved it so much that they quit their jobs to open a winery in the lower level of their home. Linda gave up a six-figure job in pharmaceutical sales. Randy left a teaching position. Many people told them a home-based winery couldn’t be successful. However, the Rice’s strong faith led them to believe otherwise. “We believe that God gave us a vision that was guaranteed to fail unless we had His help so He could prove what faith can accomplish,” said Linda.

The business venture was more successful than they had ever imagined. They added a distillery in 2013, and quickly outgrew their small tasting room. They set their eyes on expanding.

Randy and Linda invested everything they had to expand. They purchased about 100-acres of farmland along Walters Road in Hamilton Township. They recently completed construction of a new winery on that property. It’s about 2.5 miles from the original winery location. The project created about 30 new jobs.

The new place is four times as large as the original winery. It features a covered wrap around porch with vineyard views, a round wine barrel inspired tasting bar, and a stone fireplace. The building will operate sustainably. It will have geothermal power, optimal insulation, and LED lighting. “We want to protect the earth. Our children and grandchildren have to live with the decisions we make today,” said Randy. 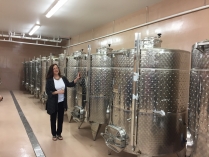 The Frogtown family of restaurants is opening a new location inside of the winery. Chef Lyman Winner said, “This is so exciting for us. We’ve created a menu that pairs perfectly with Mountain View’s local wines.” The Frogtown Bistro at Mountain View Vineyard will feature a tapas-style menu. The bistro will be open noon-6pm daily and have special dinner hours from 6pm-9pm on most Friday and Saturday nights. Dinner schedules can change during private events. Diners should check the website for details on specific dates. The Frogtown Bistro will be the exclusive caterer for weddings and special events at the vineyard and winery.

Mountain View Vineyard has hired Kate Lewis, formerly of Skytop Lodge, as Wedding and Event Coordinator. “We couldn’t have asked to have a better event coordinator. Kate has amazing attention to detail and she’s a joy to work with,” said Linda. Anyone interested in scheduling a wedding, shower, rehearsal dinner, or other special event can contact Kate at kate@mountainviewvineyard.com 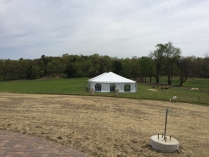 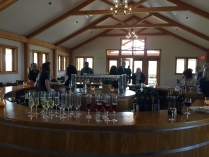 In addition to private events, the winery is also looking forward to hosting many public events and community fundraisers. Randy said, “God has blessed us so much, we want to bless the community in return.”

A special commemorative wine has been aging in oak barrels for three years, waiting for the perfect moment to be released. Vision is a medium-bodied red blend made from a trio of local, sustainably grown grapes. “This is the best wine we have ever created,” smiled Linda. The wine is named Vision to celebrate the Rice’s vision coming to fruition. They only produced 500 bottles of Vision. Each commemorative bottle is hand numbered then signed by the winemakers and the artist who designed the labels. Vision goes on sale at the new winery grand opening. Commemorative gift totes and boxes will also be available.