James, his son Landon and our office staff returned March 3, 2019 from Express International Leadership Conference in Dallas, TX where James competed against four other zones for the title of “Express International Employee Of The Year”. On stage in front of nearly 2,000, he was announced the winner.

It was an amazing moment for not only our office staff, James and his son as he received a standing ovation and load deafening cheers!
We wish James much success in his future endeavors and hope he takes this experience as a testament to how hard work, commitment and dedication is recognized and rewarded. 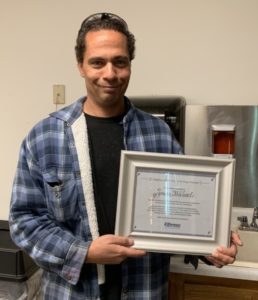 James Michael works at Collins Aerospace and has worked for Express for many years and has successfully completed several assignments.

One of the reasons James has been named our Express Employee of the Year is first and foremost, his excellent work ethic, showing up on all scheduled days on time and ready to work. James was unanimously chosen by everyone in our office for the determination and will to not only improve his life but also the life of his young son.

James’s Story:
James came to us 2 years ago looking to work immediately. He explained he was homeless, staying at the Salvation Army. He said he needed to work immediately because he needed to secure housing and a vehicle so he can apply for permanent custody of his young son who was in a bad living situation. He started work the next day. Not long after that he had descent housing, applied and went through the courses to gain permanent custody of his son. He was quickly offered a permanent position with the company we placed him at.
His son was having disciplinary trouble at day care. James took that seriously and got him the necessary help to help him overcome his issues from a bad living environment. His son is now in 1st grade and was selected as “Student Of The Month” in December.

James won the nomination for Express Employee Of The Year for the Northeast Zone. He was awarded a prize of $1,000.00. He had a full expense paid trip to the International Leadership Conference in Dallas TX plus another $1,000.00 for spending money. There he will took the stage with four other US zone nominees in front of nearly 2,000 attending the conference. The winner received a prize of $5,000.00! This is a life changing event for James and his son. We’re so proud of James and wish him much success in his future ventures!

An Employee of the Month can exhibit a variety of exemplary behaviors, including:
• Timely arrival on assignments
• Eagerness for additional work
• Demonstrates optimism and positivity
• Cooperates as a team player
• Mindful of safety for themselves and others
• Does the job right the first time
Express celebrates the success of our associates and the wonderful work they do for our client companies. Thank you James for a job well done!