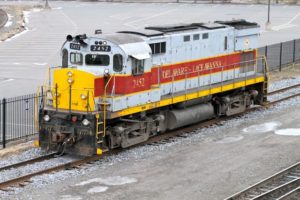 The Delaware-Lackawanna Railroad Co., Inc. (DL) ended 2017 by reporting an all time record breaking carload report of 8572 revenue carloads handled over Pennsylvania Northeast Regional Railroad Authority’s (PNRRA) regional rail system. “This report surpasses the former record of 8048 cars handled during 2015 and is very indicative of the economic growth that is occurring amongst the 20 plus industries served by the DL in Lackawanna and Monroe Counties in northeastern Pennsylvania”, said Larry Malski, President of PNRRA. The year over year carload growth rate for 2016 compared to 2017 was 31%.

“Since 1982 when the Authority was formed to save the approximately 100 miles of rail lines that the private sector railroads were abandoning and liquidating, a true rail renaissance has transpired in northeastern Pennsylvania with thousands of jobs saved and created by the many industries that need freight rail service to stay competitive in NEPA”, said Malski.

The major commodities hauled by the DL include wheat/flour, sand, plastic, lumber, propane, and consumer products to name a few.

The DL also has applied for a PennDOT grant which in part will be used to relay portions of double track along the Carbondale Line because of the rapidly increasing carloadings on the line.

“The attached chart of carloadings illustrates the growth of the regional rail renaissance in Lackawanna and Monroe Counties”, said Malski.