SUGARLOAF TWP. — John Augustine, president/CEO of Penn’s Northeast, believes the regional approach to economic development is working.
Augustine, speaking at his organization’s annual meeting at Valley Country Club in Sugarloaf Township, offered some encouraging statistics to support his claim.
• More than 2,300 new jobs created in 2017-18.
• The average salary for those jobs exceeds $14-$15 per hour.
• Penn’s Northeast received 51 new leads on possible business relocations in the last year. (Eight got tours of the region and of available space.)
• There’s more than 7 million square feet of available warehouse/office space in the Penn’s Northeast six-county region — Luzerne, Lackawanna, Monroe, Wayne, Columbia and Schuylkill. 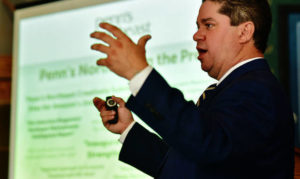 “We are definitely raising the region’s hourly wage,” Augustine said. “And we want to increase that. We have 494,900 people in our region and we are looking to New York and New Jersey to market ourselves.”
Augustine said a key to improving the area’s marketability was putting together a detailed proposal for Amazon when the corporate giant was looking to locate its HQ2 headquarters.
“Although we weren’t successful in making the final 20 list for HQ2, the regional approach to economic development has played a major role in bringing more than 2,300 new jobs to Northeastern Pennsylvania,” Augustine said. “We have seen an increase in inquiries and we have had more companies visiting properties and discussing incentives.”
Times Leader partnership
Augustine announced that Penn’s Northeast is partnering with the Times Leader Media Group on an upcoming Industrial Park Series that will cover industrial parks in Luzerne, Lackawanna, Monroe, Wayne, Schuylkill and Columbia counties.
The series will feature all of the parks and show the importance of their economic impact.
“We are pleased to partner with Penn’s Northeast,” Times Leader Media Group Publisher Mike Murray said.
“This is an exciting time for the region and its growth and we look forward to working with the outstanding companies in the area as we put together this series highlighting the tremendous resources our industrial parks add to the northeast,” he added.
Advertising Director Kerry Miscavage agreed.
“As a community newspaper, it is so important to share economic and employment growth of this area. This series will do just that,” she said. “We will cover all industrial parks in the Penn’s Northeast footprint.”
New board members
At the meeting, eight new board members were named to Penn’s Northeast: Doug Barbacci, Calex Logistics; Ron Beer, Geisinger; Traci Cross, Pennsylvania American Water; Ryan Decker, Highmark Blue Cross/Blue Shield; Lisa A. Hutchins, ESSA Bank & Trust; Joe Kluger, Hourigan, Kluger & Quinn; Timothy O’Shea, Sordoni Construction; Thomas Ruskey, Manpower.

NOTE:  ARTICLE AND PHOTO COURTESY OF THE TIMES LEADER