Pocono Mountains Municipal Airport Authority officially opened its newly expanded runway on September 21, 2010. Runway 13-31 now has a length of 5,001 feet. This project is critical to the development and long term viability of the Pocono Mountains Municipal Airport because most corporate jet insurers and the United States military require a minimum runway length of 5,000 feet for landing. 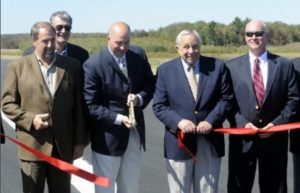 The runway expansion was NOT funded with Federal Stimulus funds. The funding for the project was the result of a rather unique collaboration between state and county governments. The first 500 feet of the expansion was funded by PennDoT / PA Bureau of Aviation. The second 500 feet was funded using Monroe County’s share of local gaming tax revenue generated by the Mount Airy Casino resort. The Monroe County Board of Commissioners and the Pocono Mountains Economic Development Corporation chose the project as an important infrastructure and economic development initiative for the Pocono community.

We use cookies to ensure that we give you the best experience on our website.Ok