At the 30th Annual FAA Airports Conference in Hershey, PA on March 2, 2011, the Pocono Mountains Municipal Airport was named Airport of the Year for the FAA’s Eastern Region. Airport Manager Rich Kuban and Board Member Greg Christine were on hand to accept the award. 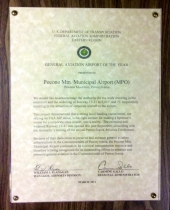 The award reads, in part, “We would like to acknowledge the Authority for the work resulting in the extension and widening of runway 13-31 to 5,001 feet…..This project demonstrated that a strong local funding commitment, not relying on FAA AIP alone, is the right answer for making a Sponsor’s vision for a corporate class airport into a reality.” The award refers to the funding partnership between the FAA, PA Dept. of Transportation (Bureau of Aviation) and Monroe County Local Share Account (gaming) sources.

“This is a testament to the sound vision that was shared by the Airport Authority, Monroe County Commissioners and the Pocono Mountains Economic Development Corporation. The award also validates the wisdom in the investment in the expanded runway and establishes the Poconos as a leader in infrastructure investment in our region”, said Airport Authority Chairman, George K. Strunk.

Strunk added “I congratulate the County Commissioners, Economic Development staff and board and most of all my fellow Airport Authority board members for a job well done.” Strunk is hopeful that this success will serve as a model for cooperation among levels of government for improvements in other modes of infrastructure in the Pocono community.