“It’s been a great honor to work together with Senator Mario Scavello and Governor Tom Wolf to secure redevelopment funds for the long-dormant International Boiler Works property in my hometown of East Stroudsburg,” Rep. David Parker said. “For decades the workers on this property manufactured products sold around the world. These funds will help bring back globally-competitive jobs and a stronger tax-base into the borough and school district of East Stroudsburg Borough, and Monroe County. It’s a big win.”

State Senator Mario Scavello commented, “This grant is a step in the right direction and will allow PMEDC to continue their efforts in cooperation with the Borough of East Stroudsburg to make it a productive industrial site once again.”

The Borough of East Stroudsburg acquired the site to assure it would be redeveloped for a job generating enterprise. The Monroe County Commissioners also approved a loan from the Revolving Loan Fund (funded by CDBG) and PMEDC secured a grant to assist in the environmental clean up of the site. The process represents a very productive collaborative effort with the Borough of East Stroudsburg. 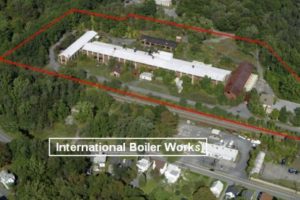 Chuck Leonard, PMEDC Executive Director, added, “This building has been vacant for a long time and now that the environmental remediation is completed, we can move on to the necessary demolition and site work to make it shovel ready. “

“We have had numerous inquiries about the site over the years and there is interest from a company who is considering an expansion,” said Leonard. “There are some steps we need to take to make that happen but this grant will assist in making it more feasible.“ It is expected that the project would create 100 to 150 new full time jobs and 25 new construction jobs.