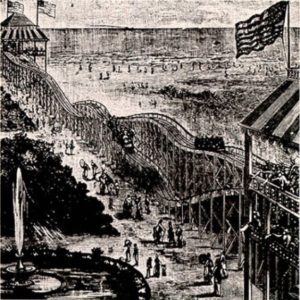 The Smithsonian Channel debuts a new series this week. The first episode of “My Million Dollar Invention” plays out in neighboring Jim Thorpe and features contributions from the Pocono Mountains Visitors Bureau.

The series explores inventions large and small that have changed lives and culture throughout history, and the men and women behind these million dollar ideas.

The first episode of the series, “Shock and Awe,” tells the story of La Marcus Thompson, who invented the roller coaster. Thompson’s invention was inspired by a visit to the town of Mauch Chunk, PA – or modern day Jim Thorpe – in the 1880s.

The Switchback Gravity Railroad was a system developed to transport coal in the town. However, when people realized the excitement of riding the rail, they began to jump on board. Soon the railroad began to charge guests for the excitement of riding under the force of gravity and the Switchback Gravity Railroad became a bigger tourist attraction than Niagara Falls.

The Smithsonian Channel visited Jim Thorpe, a town that still welcomes millions of tourists each year, and the surrounding Pocono Mountains town in 2014, interviewing local historian, Vincent Hydro and gathering photos and videos from John Drury of the Much Chunk Museum and Cultural Center.