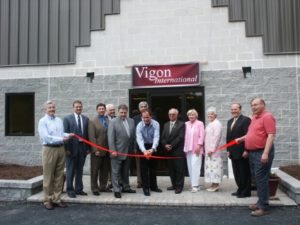 Vigon International, Inc. hosted a Ribbon Cutting June 6, 2008 for its state of the art Distribution Center. This new 30,000 square foot facility will utilize state-of-the-art warehouse and logistic management technology including RFID, WMS, and Mobile Computing. The facility will house Vigon’s warehouse, and shipping and receiving operations.

The distribution center is the third expansion project executed by Vigon in the past seven years. The center was constructed in order to meet the demands of Vigon’s growing business and the need for additional infrastructure to support warehouse and distribution requirements

The Airport Road, East Stroudsburg site was purchased in April 2001 and sat idle for several years. In 2004 Vigon was awarded an Infrastructure Development Program Grant (IDP) from the State of Pennsylvania in the amount of $521,723 and later in 2006 an additional $50,000 to extend the existing waterline terminating on Route 209 opposite the entrance to Lake Valhalla to the site on Airport Road. In 2005 Vigon received from the Pennsylvania Industrial Development Authority a low interest loan in the amount of $1,281, 233 which represented half of the budgeted dollar amount for the construction of the Distribution Facility. And in 2007, the Northeast Pennsylvania Alliance under the auspices of the Department of Agriculture Rural Development (DARD) issued a low interest loan in the amount of $120,000 to facilitate the purchase of capital equipment such as forklifts, backup generator, etc. for the new Distribution Center. These Grants and Loans were applied for, managed, and pursued on the behalf of Vigon International by Pocono Mountain Industries (PMI). Without the support of these programs and the significant efforts put forth upon Vigon’s behalf by the team at PMI lead by Chuck Leonard and assisted by Michelle Bisbing, this project would not have been possible. Likewise the support received from Representative John Siptroth, the County Commissioners Office lead by Chair Suzanne McCool and Donna Assure, the Smithfield Township Supervisors, and the Brodhead Creek Regional Water Authority went a long way toward seeing this project go forward.

The Ribbon Cutting ceremony and the eventual opening and operation of the building for business, demonstrates the commitment of Governor Rendell, his administration, and the state of Pennsylvania to the retention and creation of new employment opportunities in the state and the support for the growth of small businesses in Pennsylvania. It also demonstrates the power of a team of employees who come to work every day with a can-do attitude, with pride and motivation to improve how it is they perform their job every day, and who have a sense of ownership for their job so as to become an integral part of a company that realizes its greatest asset are its team members.

Vigon International, Inc. located in East Stroudsburg, Pennsylvania is a privately owned ISO 9001 – 2000 certified manufacturer and supplier of high quality flavor and fragrance and ingredients. Vigon’s product offering encompasses over 1,800 items including essential oils, natural and synthetic aroma chemicals, oleoresins, and botanical extracts. The company’s comprehensive manufacturing capabilities coupled with their ability to successfully partner with major multinational flavor and fragrance houses has firmly established Vigon as one of the most progressive companies in the industry.