The Delaware-Lackawanna Railroad Co., Inc. (DL) notched an all-time record for freight carloads handled in 2019 with 9,690, which marks DL’s third straight year of carload records.
The mark bested 2018’s record by 2.5%. And DL, the designated rail operator for the PNRRA-owned rail lines in Lackawanna and Monroe Counties, also was successful in obtaining and is administering $2.8 million in PennDOT grants through year-end 2021 on the Authority’s rail infrastructure with new ties, rail, ballast and surfacing being performed and two bridges being upgraded for growing rail traffic. 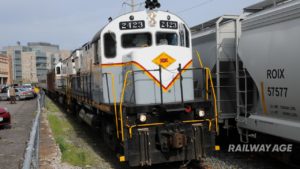 The Carbondale Rail Transload also was recently awarded a PennDOT grant for further upgrades and expansion of its facilities in Carbondale, Pa., in the amount of $297,528.
“These numbers show the explosive economic growth and development that has taken place since the Rail Authority first acquired these rail lines that were facing abandonment and liquidation by the private railroads in the 1980s,” said Larry Malski, President, PNRRA.
“Initially only about 500 carloads per year were handled, and since that time many new rail-dependent industries employing thousands of employees have located and invested in NEPA because of the guarantee of continued rail service here,” Malski stated.
“This new industry has become our second largest rail shipper and is indicative of the new rail-dependent industries that have created new jobs and economic development in Lackawanna and Monroe Counties,” said Malski.